Smiley®, the most recognizable logo in the world, inventor of the emoticon and leading representation of happiness, is finally ready for its television debut.  Smiley®, OuiDO! Productions and international brand manager PGS are teaming up to launch an original, animated TV series around the brand for kids 4 to 7 years old.

The new series will be produced by OuiDO! Productions (ALVINNN!!! and The Chipmunks, Monchhichi, Sonic Boom) and by associate producer Theresa Plummer-Andrews (former Head of Acquisitions, Animation and Co-Productions for CBBC and CBeebies), who will oversee the development. As the IP owner, Smiley will be in charge of all related brand development and will be executive producer on the series.  PGS, which is known for representing iconic properties such as The Little Prince, Playmobil’s Super 4 TV series and Iron Man, have acquired all international media distribution rights to the show.

“Smiley has been more than a spirit and philosophy. It’s a wonderful reminder to people everywhere of how powerful a smile is and how much a simple smiley can change both your life and the lives of others around you. Working on a TV series for kids today enables us to spread our values to younger audiences throughout the world, making it  a happier place. It’s a natural expansion, after 42 years of success, to give life to the famous brand founded by my father and the emoticons I created in 1997,” said Nicolas Loufrani, CEO.

“With the Smiley characters, we have the ability to create a fascinating universe of comedy and adventure, aspirational to our audience. The possibilities for character development are endless and we believe we can make a magical show,” said Sandrine NGuyen, Executive Producer, OuiDO! Productions.”

“For the first time in kids TV, we have a universe that provides us a wonderful opportunity to help kids under-stand a range of emotions, while always emphasizing the positive,” continued Theresa Plummer-Andrews. “I’m delighted to be working with everyone at OuiDO! and Smiley.”

“Smiley is an icon for kids and parents that provides endless comedy potential with the ability to understand emotion in a fun and entertaining way. It’s a unique project now in production with marquee partners, such as Ouido, and will tap the expertise of Theresa, whose name has always been synonymous with great, entertaining and positive content,” notes Guillaume Soutter, President, PGS HK. “With Smiley being the creator and the market leader in happiness, we couldn’t be prouder that we are representing the very best.”

OuiDO Productions also develops a TV Series with TF1 and Canal J based on the comic books published by Editions Delcourt, “The Legendaires” (26 x 22′) and intends to keep acquiring the audiovisual adaptation rights for existing licenses or original properties.

Theresa started her working life in theatrical agencies, progressing to production manager on Elephant Boy, filmed in Sri Lanka, Singapore and Australia. She then worked for Global Television on their accounts with the ABC, Australia and TVNZ, New Zealand. While there she became the Account Executive for SBS, Australia, helping to secure programming throughout Europe for the then new multi-cultural channel. Theresa then joined TVS, one of the ITV Franchise companies as Head of Acquisitions, then moved on to the BBC as Head of Acquisitions, Animation and Co-Productions for Cbeebies and CBBC. Whilst at the BBC she also worked as head of children’s creative development with BBC Worldwide and was also Executive Producer on multi-country co-productions with the EBU Children’s Committee. She left the BBC 10 years ago and has since headed up her own consultancy company, Plum Trees TV Limited.

Smiley, the happiest brand ever, was founded by Franklin Loufrani in 1971 through a newspaper promotion to make people happy. Using the logo to highlight good news, it allowed readers to see the bright side of life throughout any day.

In 1997, Franklin’s son Nicolas introduced the first emoticons, which would become the universe of SmileyWorld and a staple of the vocabulary for the digital generation today.

Smiley has also always had strong links to music, where the Smiley face was adopted by the 1970s peace and love movement and then became the icon for the global explosion of dance music in the 1980s.

Over 4 decades, Smiley has become the most recognizable icon in the world and remains so to this day.

However, Smiley is more than just an icon, brand and lifestyle; it’s a spirit and a philosophy and exists to remind people of how powerful a smile is and how much a simple smiley can change both your life and the lives of others around you.

The Smiley Company is one of the 100 biggest licensing companies in the world. The trademark is registered in over 100 countries and in more than 25 product categories and has significant exposure through licensees in sectors such as clothing, home decoration, perfumery, plush, stationery, publishing and more.

PGS has been a partner to leading IP (intellectual property) owners, providing strategic international media distribution for properties such as The Little Prince; Iron Man; Super 4, the Playmobil® series; The Jungle Bunch, LadyBug and ALVINNN!!! and The Chipmunks. Today, PGS is one of the largest providers of animated media content to leading broadcasters and partners around the world.

Smiley are delighted to announce the renewal of its license with Italian fashion brand Happiness that will see the launch of the second collaboration between these champions of positivity from high summer 2014.

Speaking about the deal Smiley CEO, Nicolas Loufrani said, “Happiness is a brand that shares a common ethos with Smiley, to create premium streetwear products aimed at spreading positivity around the world. I am personally delighted that we have been able to renew our license with them after such a successful AW13 campaign.”

Products will be distributed through Happiness stores across Italy and on the happiness10.com website. 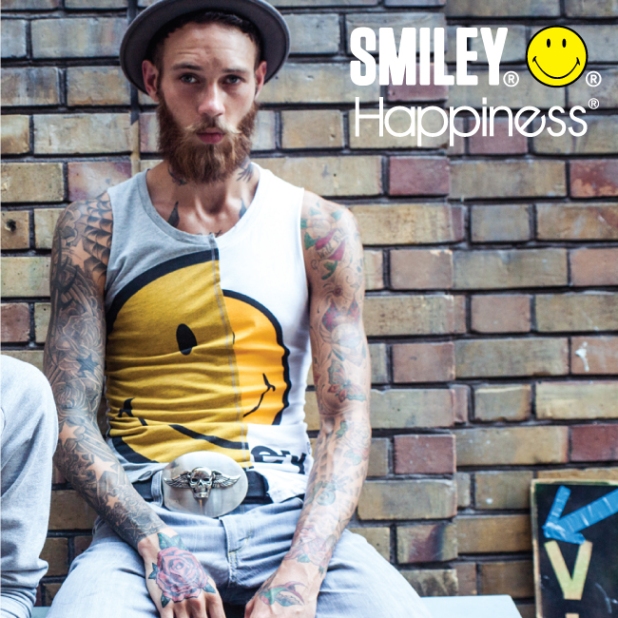 High Quality Italian Pasta specialist, Dalla Costa has chosen SmileyWorld and its range of icons to approach innovatively and reinvent the Food Market and boost your daily meals with expression and happiness.

Smiley and Dalla Costa are now the only producers of pasta that smiles combined with the quality of ‘Made in Italy’.

The tradition of Dalla Costa and Smiley will turn lunch and dinner into a new positive experience… save the dates: Milan, Tutto Food from the 19th-21st of May and Sial China 2013 in Shanghai.

Smiley is in  China creating a fashion storm! CEO, Nicolas Loufrani is introducing Smiley with one of the most creative and colourful stand at CHIC Beijing Fair to the Chinese market. With new partnership set up in kidswear fashion with Impact, cashmere sector with Pearl Source and Jewelry with CHJ, the chinese country welcomes the Smiley and SmileyWorld brands to bring a refreshing and positive vibe.

Look at the pics 🙂